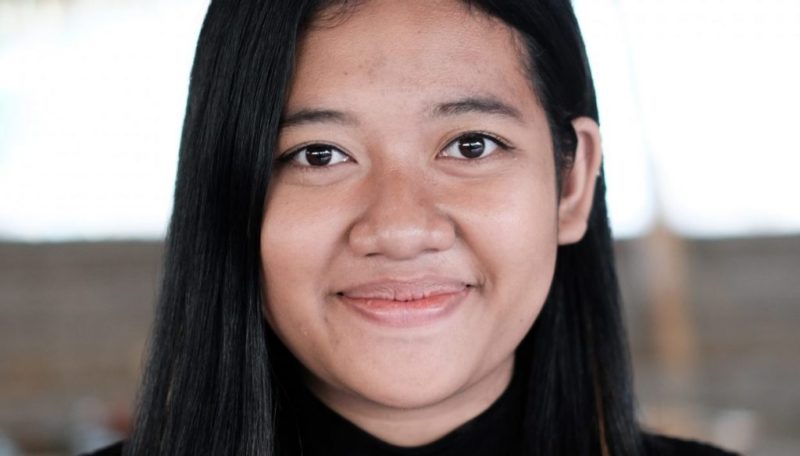 This story is written by Achintya Nilsen from SevenStonesIndonesia

“I came from Jakarta. And when I moved to Bali, I didn’t know anything about the language or culture, or traditions. Yet the locals were always very helpful, wanting to make sure I was settling. And because of that, I just wanted to do something to help the local people thrive.”

Teshalonika Krisanti, former student and graduating class of 2018 at the Green School in Bali, had a passion. A passion for teaching, for the arts, singing, and sustainability. Using that passion, she then built a school, inspiring dreams and generating change within her surrounding community. As a result of the realization that change starts with you, she formed an organization now known as Kampoeng English. Kampoeng English is a nonprofit school first established in 2016. Occurring two times a week, it is a space to empower the local children to be confident, to be themselves, and to follow their dreams and ignite their potential. Tessa is aware that sometimes, feeling stuck in their regular school, schedule, and routines, or due to a lack of recognition from the elders in their community, the Balinese children are not encouraged enough to be themselves and pursue their interests. She wishes to equip these children to strive for the future they want, through sustainable education and hands-on learning.

Recently, I was fortunate enough to have the opportunity to catch up with Tesha and have a conversation about her organization. Learning everything from when she started, to why she launched it, and how it has evolved over the years. “At the time I was thinking about making this school, I asked my dad on how I should go forward with this, what I should do.” She says, “And he said you know, change starts from you. So look at yourself, at the things you have, and start from there.” She knew she could speak English. She loves children, the arts, and singing. So she decided to combine her list of talents and build her school. Though, “I didn’t start from the building,” she informed me. “I started from my house terrace. It was just what we had.” She knew that if they waited for something bigger to come, they would’ve waited for so long. That if she had waited for a building to drop onto her lap, before getting the school started, it might have been years before they start. “People often focus too much on the building, and the other aspects of creating an institution, that they forget about the children.” So, instead of waiting, Tesha took her ideas and turned them into action. She incorporated her love for singing and the arts, her knowledge on sustainability, and took what she learned from being at the Green School, and implemented them as part of her curriculum.

Kampoeng English is intentionally designed around a flexible curriculum. With the support of a few other team members, Tesha wanted to create a system that outlined a class but allowed space for the students to contribute their passions and interests. A student might want to include some dancing or art lessons, or more recently, “one student has taken an interest in science.” They are free to bring up a topic of their liking, and the team figures out an activity based around it. The school is taught in both English and Indonesian, and from time to time, international volunteers come around to help the kids practice their English speaking skills. “The school is not about writing.” Tesha vocalized. “I don’t ask them to bring books or anything; I just ask them to bring themselves and their willingness to learn.” Often, Tesha will also educate the children through her singing, with a lot of the songs being original songs she wrote for them. “I write songs based on the topic. For example, if this month we’re talking about colours, then I would make the song about colours.” And sometimes, she will collaborate with the kids as they make the songs together. This interactive or hands-on learning is a method many of us from the Green School are familiar with. In a lot of cases, it allows for better interpretation and understanding, and the freedom to take responsibility for the future you want to see inspires us to make our own changes, take action for the things we believe in.

“I want to bring this movement as a wake-up call. That we have to listen to the children if we want real change to happen.” Upon hearing this statement, I could only nod my head in agreement. There is a saying that goes, “We do not inherit the earth from our ancestors; we borrow it from our children.”

And in Tesha’s case, it is not just a simple statement, but something she’s incorporated into her life perhaps due to her own experience. Growing up, I have come to recognize that what inspires us to move in kindness is an influence from witnessing our parents’ actions of kindness. I could not say I would be the person I am today, dedicated towards acts of service if I hadn’t observed my parents take time out of their weekends to donate to those less fortunate then us. When Tesha decided she wanted to move from Jakarta, to go to a school in the middle of the jungle in Bali, her parents showed their support and trust in her by following her, and making the move to Bali themselves. “When I got here (Green School), my parents followed me because of my dream, and for that was crazy; they’re crazy supportive.”

Tesha is the middle child in a family of three sisters. Her father, who works as an artist, had his own painting gallery in Ancol, Jakarta. And her mother was working at an international school, also in Jakarta. When Tesha learned about the Green School in Bali, she knew that no other school would compare, and convinced her parents to allow her to relocate. She persuaded her dad to apply for work at the school, telling me that “it took him forever to make a CV because he wasn’t really into that kind of office work. So I took over and made his CV for him. I was in ninth grade.” And it was this passion, this fierce dedication in the pursuit of her dream that she not only got him accepted for work but also secured her spot as a student.

Tesha entered high school at the Green School around 2015/16, and she recalls it being “like a dream come true. It was so surreal, and it felt like one of those moments where you wake up from your dream, and you’re here. It was my reality.” “But as time went by, I started noticing something.” In the moments leading up to her acceptance, she had been one of eight Indonesian students waiting to be a part of the full-ride scholarship program offered at the school. Between the eight, only one was to be accepted. Upon receiving the approval to commence as a student at the school, she was extremely grateful but was acutely aware of how rare this opportunity was. A chance that not a lot of locals have access to.

“I realized that there are a lot of local people, especially in the surrounding area, that doesn’t have this opportunity to receive the amazing education and values that are available at the Green School.” Despite her coming from a different background, the Balinese community was still very welcoming towards her and her family. And what amazes me about her actions is that, as a result of this kindness, she did not just bask in the warmth of the acceptance, she went “I want to express my gratitude, I want to give back.” “Because I feel like I have been given so much by the Green School, and I hadn’t done enough for the local community.” Tesha didn’t settle for baking a cake and knocking on doors or inviting people over for food as a token of her gratitude. And neither did she just sit in school feeling thankful for the unique education she was receiving. She wanted to give back to the local community. She wanted to pass on this knowledge she had acquired, and the passions that she had. “How do I do this?” She asked her dad. And he said, “you can start a school” To which she responded, “A school? I don’t have the resources to build a classroom,” Which was the conversation that sparked his encouragement to her enthusiasm, mentioning that education doesn’t necessarily have to start with the building. “He said that when you see some of these kids take an interest in your conversations, in what you have to say, in that way, you’re already passing on some sort of lesson and learning.” Tesha recites.

So, in September 2016, she decided to start.”The night before it all started, I was crying because I was so nervous. And my dad continued to encourage me, reminding me that I have to start. But I didn’t know the who part of it. Where was I supposed to find children that would be interested in this? Who was I supposed to invite?” “And then I saw these two children at the warung in front of my house.” She went up to them and asked them if they wanted a lesson in English. They wondered if it would be free, to which she responded that they would not have to worry about the money. And the response was pure excitement. They spent the time in her house terrace just looking through English books. At the end of the lesson, she never told them to ask a friend to come, or to spread the news, but regardless, when the next week came along, five children turned up at her house, waiting to receive their lessons. “It wasn’t easy for me in the beginning,” Tesha admits. “It was a new routine for me. Plus it was on a Sunday morning. And though I said lessons start at 9.45, they always came early. You know how Indonesian students are like that. I’d have kids turning up at my house at 8 am calling me and announcing their arrival.”

She revealed that despite the difficulty, in the beginning, she only ever wanted the project to circulate and grow organically. Expanding naturally through word of mouth and communication between the locals. By the second month, she was giving lessons to around 10-15 kids. As the project gained momentum, it gathered the attention of a variety of interesting people, sometimes very important people. At the end of November 2018, a friend of her father’s friend had spoken about Kampoeng English to a Balinese man who had an influential role in the government. The project piqued his interest, and he immediately went to set up a meeting with Tesha. Read more here.

Written by: Cassandra Smolcic While the #MeToo movement has done an extraordinary job of identifying…

All in Good Time