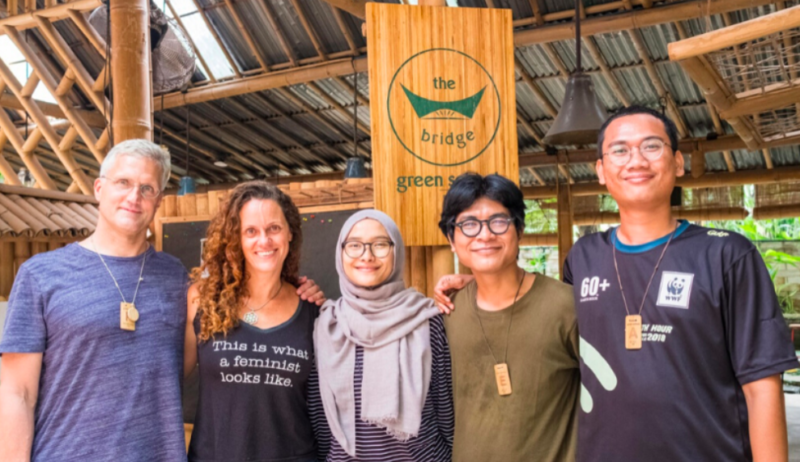 “Fundamentally the mission of The Bridge comes down to a single word: kindness. We have a Manifesto which outlines our values and “rules” at The Bridge. There are 16 rules. Rule #1: Be kind. Rule #16: Be kind. I think that sums up how we need to act, as humans in this world.”

This article is written by Achintya Nilsen, a Green School Alumni, for Seven Stones Indonesia

When I first met Chris Thompson, I knew him merely as the guy who “I think is part of the school board?” Or “Chayton and Chenoa’s Dad” (two students at I knew at the school).

As it turns out, Chris ran the Green School. Initially holding the title of Director, and then later on Director of Development, while also managing the development support for the Local Scholarship Program. He spent over five years at the school, and to this day remains very involved. Inspired by his time at the school (and perhaps after hearing too many parents and adult members of the community utter the words “I wish I went to a school like this”), he (together with co-creator Carol Da Riva) launched the program ‘The Bridge’; A co-learning center catered towards the adults in the community.

Before Green School, and before Bali, Chris Thompson worked with Electronic Arts (EA), one of the largest video game makers in the world. He started immediately after university and spent 23 years working there, 20 of which he spent living abroad, outside of his home country, the United States of America. I briefly wondered how he took the turn towards education when Chris mentioned that he spent quite a bit of time sitting on several educational boards. “I was advising the governments of Abu Dhabi and Singapore on the development of their media, tech, and educational sectors,” he revealed, additionally touching upon his experience speaking at different conferences and events on media and education.

When I asked him what initially brought him to Bali, he said, “I had had enough of the corporate world. When I left EA, I wanted a change. We heard about Green School, so we decided to move to Bali and try it out for a year.”

Perhaps many of us can relate to what happened next, when his one year then turned into 11 years, and counting.

Having spent many years at the Green School myself, I was interested in learning more about how Chris managed to create a similar environment for non-students. The Bridge officially opened in September of 2018. But the process of turning it into reality started many years in advance. “I have been trying to open a co-working space at Green School for over eight years,” Chris shared. “I have always felt that the parents need a space for their own.”

They were close to opening a center on the opposite side of the river. The school being on the other end. But there were logistics that stopped that. The school built a second floor for the main Warung (one of the buildings where kids could go to buy some food within the school) and there were attempts to reserve that floor for such purposes. But that also did not turn out to be that great. Speaking from a former student perspective, I can imagine it would not have been the most quiet of places for a co-working space. When Chris then left the Green School, he ran Bali’s first co-working space, Hubud, which was started by Green School parents who were friends of his. “I actually tried to get them to open a space at Green School, but it was too early in their cycle for that,” Chris divulged.

Eventually, he left Hubud, and coincidentally, at the same time, the school was looking to open a center. “The timing was perfect. I had some ideas, as did Carol da Riva and Kate Druhan. And together, we opened The Bridge,” he vocalized.

The Bridge launched in September of 2018, and to date, they have run over 500 programs, talks, and workshops. “The idea was to create a space that allowed people to set an intention, make meaningful connections, and get to where they wanted to faster. We call it “Green School for Grownups” and created a center of learning for the adult community,” Chris explained.

On the first day of its formation, they filled up immediately. Though things have settled down since, the response to The Bridge remains positive, and they continue to look at ways to improve. “The parent community is so exceptional,” Chris revealed. “They are talented but also want to make the world a better place. Bringing them together has been wonderful, but we need to refine how we continue to improve interactions and connections.” Following this statement, I asked if there were anything he would do differently, should he have the opportunity to start all over again. To which Chris responded, “I think hindsight is always a tricky way of looking at things. And if we apply this perfect knowledge then we would have ended up with something different. There may be a few rounding errors we smooth out, but in general, I like how it has evolved organically.”

Chris further mentioned an interest in launching an online program. “Now that the world has moved to online learning, it has given us an opportunity to look at this as well.”

The idea would be that, as the Green School Everywhere launch program expands around the world, so would The Bridge, with the main focus being on the parents and adult community.

As a final thought, I asked what the aim Chris and team intend with The Bridge is? And there is no better way to conclude this, than in his own wonderfully structured response:

“The purpose of Green School is to be addressing the whole child (spiritual, emotional, intellectual, and physical) so that the education process doesn’t separate the child from their whole self. We see the damage this has created with schools only focusing on testing and grades, which is an intellectual pursuit. But as we all know, we aren’t just our minds. And in my view, this singular focus on the intellect has created significant problems in the world from political differences, sexual violence, racism, domestic violence, work unhappiness, and so much more. If we can launch children out into the world as whole beings, then they will be better prepared for the challenges of the world.”

“This isn’t just my view. Research supports this.”

“So if Green School is trying to prevent the separation from the whole self, what The Bridge is trying to do is to provide a space that allows the whole self to realign. We do this by supporting parents’ interests and passions that are aligned with their values. We become misaligned with our values and truths when we only listen to our heads. So The Bridge is a healing center for the spiritually disconnected individual.”

LISTEN TO THE PODCAST Francis Mollet is an environmental activist, teacher, surfer, musician, husband, and…

In one of the recent Bridge Newsletters, there was a question about The Meaning of…