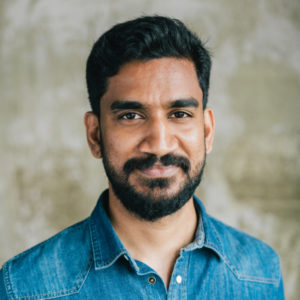 Aravinth is a devoted social entrepreneur empowering underserved communities in war-affected regions of Sri Lanka to solve local socio-economic and environmental challenges. He was born at a difficult time when his family lost several members – innocent civilians slaughtered as collateral damages in the civil war. At the age of 14, he escaped the country in fear of becoming a child soldier, for ten years exiled as a refugee, and returned when the war ended almost after three decades. His craving to uphold those who went through the same life experiences propelled him to co-found DreamSpace Academy.

The Green Leadership Impact Heroes series is a partnership between Bridge and Earth Company.

Earth Company’s flagship program, Impact Heroes, selects an exceptional change-maker in the Asia Pacific who has the potential to realize social change for future generations. Impact Heroes receive customized three-year support including funding ($>100k), marketing support, and coaching to maximize their impact and potential as leaders. In addition to one Impact Hero, Earth Company works with a cohort of changemakers every year as part of an empowerment program.

This talk is online and we will Livestream it at The Bridge.