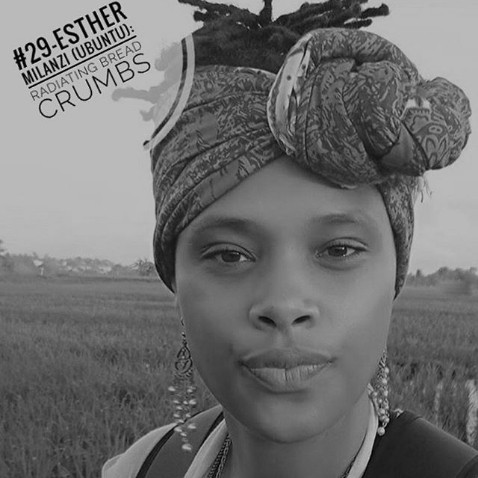 LISTEN TO THE PODCAST HERE

Esther Milanzi (Ubuntu) is a creative writer, educator, traveler, wife to her husband Angelo and someone who radiates bread-crumbs for other creatives. She is the co-founder of the Surat Warrior Writers group in Thailand, she conducts weekly creative writing workshops and writer’s groups here in Bali, she is passionate about building a community of creatives and cultivating alternative ways for people to connect (other than just partying). Esther is currently a superstar educator at the globally recognised Green School, Bali. She is a black South African and half Caucasian American who has spent most of her life in America with her mother and two sisters. Esther was estranged from her biological father who was deported from the USA when she was three years old. The opportunity to visit the birthplace of humanity (Africa) arrived after she finished graduate school from Florida State University with a degree in International Education Development. Esther was then awarded a Fulbright grant to teach leadership and literacy skills at a FET college in Vereeniging, South Africa, an Afrikaans town forty minutes south of Johannesburg. Esther’s traveling experiences (and blogging while doing so), became an unintentional journal of her healing journey, it has helped her to develop a deeper understanding of the post-apartheid racial climate, and it has given her a sense of closure after visiting her father’s gravesite (twenty-three years later). Esther’s travel journey of self-realisation also led her to meeting her paternal family (including a younger brother and sister). It was with this connection that she received, from her cousin, her South African name Ubuntu; meaning humanity. In this week’s episode, Esther is with me to share her experiences, challenges, strength, and hopes for the future.

Note: This is a personal project of Shannon Farrugia, a Green School teacher, called the “Terrible Happy Talks”. The Terrible Happy Talks (THT) podcast is an extension of his desire to give back and be of service. He’s intrigued by people, he like stories, deep conversations and learning. For Shannon, when he takes the time to listen to someone else’s life story, their challenges, successes, experiences, and hopes for the future, he identify with elements of their journey almost every time. Make sure you check out more of his episodes here: https://terriblehappytalks.com/

The GSPA would like to invite parents to join us for a virtual panel discussion.…

All in Good Time

With accurate information and truth being under assault in countries around the world, investigative reporting…